We live in times of endless choices. I just noticed again very acutely when I went shopping for some new furniture. For example, I want to get a new wardrobe, because my current one had never been all that great since I got it: It was a second-hand one that had been stored in a garage for too long during humid weather, and never fit together 100%. But I was fresh out of university, and it still looked good and I got it for free, so I didn’t care too much about the state of equine’s molars. Now that I move again, though, I decided I’ll leave it behind and get a new one.

IKEA has a nice and highly modular wardrobe system called Pax. The opportunities! But now I had to decide: Do I want a longer clothes rail and fewer shelves, or the other way round? Oh look, I can split just the lower part of the rail area: full length for coats, half-length (with some drawers below) for shirts. And they have shoe storage too? And 4 kinds of drawers and about 27 combinations frames and doors? But which should I take?!

The bottom line is, I’m still without a wardrobe. (I haven’t yet made my peace with it, to not leave the obvious pun unsaid.) The last couple of months made me make lots of, sometimes quite far-reaching, decisions. I feel like I’m thoroughly exhausted on decision-making for the time being. I just want a nice wardrobe, but not spend days on designing it. On the other hand, now that I know that there’s so much choice, I can’t just take a predesigned one, because I know I have the possibility to improve on that. So I’m stuck in decision limbo.

Choice is not always good.

For the same reason, it took me almost 3 weeks to decide which Internet provider to take. I tried asking around at the workplace for experience with providers in this area, and as a result, I’m still waiting on “real” Internet and currently use a mobile connection for my Internet needs. Which works… ok, I guess. Better than I had feared, but it comes with limitations. Which means there’s less choice in what I can do. For example, I’d rather not stream videos, because of the monthly volume limit. For the same reasons, I don’t dare to update too many online games.

This has an unexpected beneficial side effect. When I first realized that I had leisure time again, I was a bit out of practice and couldn’t come up with something to do with all that free time. The worst part was that I had to decide which of the many games available I should play. I have a large Steam library, and about a dozen MMOs I could choose from. But having a somewhat strict monthly limit, I realized I couldn’t really afford to update lots of games, let alone download new ones. So I had a look at which games needed no updating, and picked one of those. 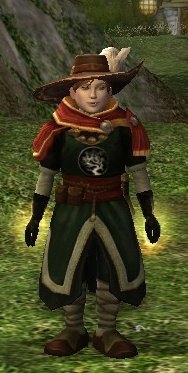 Minstrel back in action!

Which is just a very roundabout way of saying that I spent some time in LotRO again for the first time in… maybe a year or two? I dusted off my Minstrel, and got going.

I’m actually surprised how little data MMOs (or at least LotRO) exchange with their servers. It seems as if the other background traffic of a mail program, browsers, etc. uses more volume than the game does, to the point where I can easily stay below 200-300MB a night.

LotRO is nice for some other reasons. It is a very relaxed game. At least the way I play it, I spend a lot of time just traveling through the world (which is still one of the best in any MMO I’ve seen), with some laid-back tab-target fighting without any strict timing requirements (which is important, because I often have about 300ms lag). It’s great! It’s almost like a meditation exercise. Except that this meditation exercise got me upwards of 30 levels, from before Moria into early Rohan. Who can say that about their yoga exercises? All you get from those are slipped discs.

There is one more reason that LotRO works well over the mobile connection. At some point, I did have to update the game because a small content patch had come out. If you ever played the game, you know that their updater is one of the worst in the business, because it’s excruciatingly slow. I’ve now proven by demonstration what I always suspected, that your line speed indeed has little influence on the time it takes to update: it works almost as fast over a somewhat slow mobile connection as it worked over my 3MB/s+ DSL. So relatively speaking, it’s going faster! (Well, in Bizarro world, which I like to visit every now and then when I come up with weird comparisons, thanks for asking!)

So even though Sid Meier supposedly said that good games are a series of interesting decisions, sometimes a game can be good even if (or maybe because) its decisions are very low-key and, at face value uninteresting.

Maybe in another 10 levels, I’ll have recovered from my decision paralysis enough to order that wardrobe, after all.