In a few hours, it will be 3 weeks since I joined Pandemic Horde to take part in World War Bee. Since servers are down (and I found a way to quickly and potentially automatically create sovereignty map animations), it’s a good time to look at my current impressions.

There was a discussion at the Ancient Gaming Noob’s last week about how to figure out who has won and who has lost the war, once it’s over. My personal take is that this is difficult for two reasons. First of all, it might not be clear when the war is over. It might drag on for a long time, but reduced in scope. There will be no official surrenders to mark the dates. Just like big conflicts such as the 30 Years’ War, it might end up being a bunch of somewhat-related smaller conflicts lumped together under a label, with the difference that we most likely won’t have a Peace of Westphalia to mark the end. It will also be difficult to decide who has “won”. It’s not uncommon that wars end with both parties claiming victory. This can be just for propaganda reasons, or it might be legitimately so because the win conditions don’t align.

The Imperium’s area is steadily shrinking (click for larger version).

I therefore decided that I’m better off defining my personal win condition: I will consider this war a success, and won for my intents and purposes, if Goonswarm federation loses all its sovereignty. I might accept a situation in which they lose all their northern possessions, but manage to establish a foothold in another area of Nullsec, but I would consider this only a second-class victory. This victory condition aligns well with my personal convictions. I don’t care much about GSF’s “Imperium” buddies, so I focus on GSF sov. And with a background in strategy games such as Civilization or Europa Universalis, I am a map painter at heart. I like to see areas taken and held, and my enemies to lose theirs. And it seems as if that goal is reachable: within the last three weeks, Goon allies have lost almost all their sov, and within the last ten days or so, the Goon heartlands have slowly been occupied by others. A ragtag coalition of Mordus Angels, Darkness., NC., Short Bus Syndicate, The Blood Covenant, Slyce, and my own Pandemic Horde, has eaten up large swathes of land… well, space, but you know what I mean.

So my victory condition looks very achievable, and within reach. however, there are still a few things I’m worried about. First of all, the Goons are not nearly defeated yet. That doesn’t come as a big surprise. However, they’re so much not defeated that they managed to attack and even take back sovereignty recently (the sov maps always lag a bit behind, so they don’t reflect this yet): 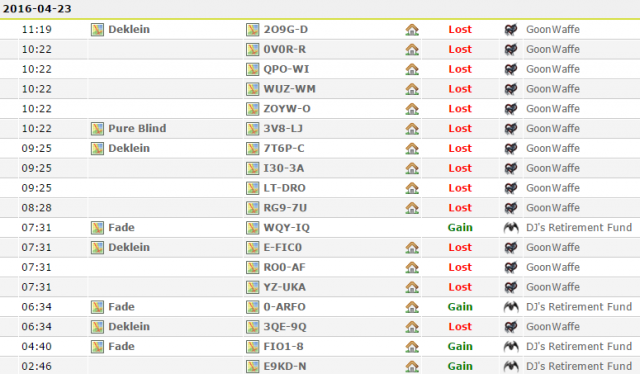 Still many losses, but also gains again for the first time in a long time.

However, the general attitude to that is “well, at least they undock again so we have something to fight”. And I think that gets me to the fundamental disconnect I have with Pandemic Horde, and many other EVE players: they play to fly ships and fight others, and the results of that are secondary. That also explains why, even in a war situation, some FCs and many players are happy to just go out in small fleets and whelp them against much more powerful fleets, where the outcome is already a foregone conclusions. They prefer to have “good fights” (though I’d argue such a lopsided battle is hardly a good fight) to not fighting and coming back another day. I find that behavior a bit too frivolous for my taste, at least if it ends up in fleet whelps against the war enemy.

I, on the other hand, generally don’t care much about the fights themselves. For me, fights are almost always a vehicle. I go on the occasional roams just for roaming’s sake, but those are rare. I only see sense in fighting if it furthers my goals, such as gaining or defending sovereignty, or demoralizing an enemy by crushing them with superior numbers. I actually like entosis fleets that take two or three hours and never see a single fight. As I said, I’m a map painter. Thus, it annoys me that most people don’t seem to care that we lost four systems in the last two days, and might lose a couple more in the near future if people don’t go out to defend them.

In the end, this is probably more a mismatch thing between me and my corp. Pandemic Horde, after all, is the baby wing of Waffles and Pandemic Legion, who both don’t seem to care much about holding system sov. This is fine: I half expected that, and the only reason I ended up in Horde is that it was the easiest and fastest way to get into the war against Goons. I probably will drop out after (or if?) my personal victory condition is reached. I just have to think again about what I actually want to do after that.

Or maybe somebody from Horde leadership will publish an announcement pushing for a more coordinated sov defense soon, and will make me look like an idiot. Who knows?