The invite (see last post) didn’t take too long to appear. I used the meantime to check reddit, which suggested putting some jump clones in strategic places before accepting the invite, because, high-sec wardecs and all that. It only took me about 150 jumps back and forth, and back again, and running out of jump clone, and clone jumping to a different clones, and flying back 30 systems again to my almost-impossible-to-tackle interceptor… where was I again? Oh yes.

Then I had to set up forum logins, and mumble logins, and IRC logins… really, IRC? I feel like I’m young again! All the while I got a deadline ticking for a fleet that I wanted to join. So I rushed to the staging system in Okagaiken while still haphazardly setting up my overview and all the other small things you’re expected to walk through. It almost felt like the good old days.

I arrived at the staging system about 5 minutes late, which, as everybody who plays EVE knows, is plenty early, because such a big operation (it was too big for a single 250-people fleet) takes at least half an hour to get going. There was just a small problem: I had come with my travel inty, and had no ship at all in the staging system. And because I’m not very good with the EVE interface (which, in my defense, can be a bit… confusing), I didn’t realize there were Feroxen on the market as corporation-only sale contracts. Yes, I decided to run with Feroxen as a plural Ferox for now, because I like the sound of the that. It sounds old-fashioned and endearing, like oxen or VAXen, just the right thing for a ship that was the laughing stock of everybody for the longest time, but suddenly seems to not suck any more. Seriously, you walk away from a game for a year or two, and thing change! The audacity.

Thankfully, all I needed to do was wait for the call for logistics. There never seem to be enough logistics in fleets, and so they handed out Ospreys to people able and willing to fly them. They even came with a set of combat drones, so I could assign them to a random person and maybe cheat my way into some kill mails! They also had a call for entosis pilots, but since I have no idea how that system works, I stayed with Logistics. At least I’ve flown space priests before.

The fleet got going about 30 minutes late, which is not bad considering a 300+ people fleet with lots of new pilots who have never done a fleet, and many, like me, who may have never gone out on one with Pandemic Horde. Someone mentioned that in the last week, over 500 players had joined. Finally, the “undock-undock-undock” command came, and we promptly went down to 80% TiDi. That would be interesting.

The first few jumps, we logis practiced our cap chains, which worked perfectly almost immediately, which I found pretty good going for a mostly ragtag band of people. (Then again, maybe the logi pilots are on average older players and already know a bit more of how this stuff should work, at least in theory.) 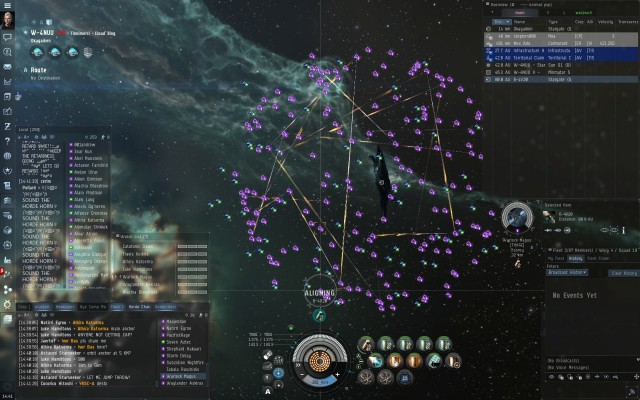 We jumped a few systems into Fade and then waited. And waited. And waited. Then we got the information that the fleet we were heading out for to fight decided not to face us, and that there probably would not be any fighting. That’s the way of EVE I guess.

But while we were out here, we at least could get our entosis wing to work, so we headed over to YKSC-A (seriously, these names are horrible. They’re literally random characters mashed together. I have to look them up every time. I guess nullsec players eventually learn to cope with them? ) and installed an Infrastructure Hub in SMA’s space. I’m not really sure what that means, especially since there was still a TCU (territorial control unit) by SMA in that system, but I guess it means a tactical victory, so go us? 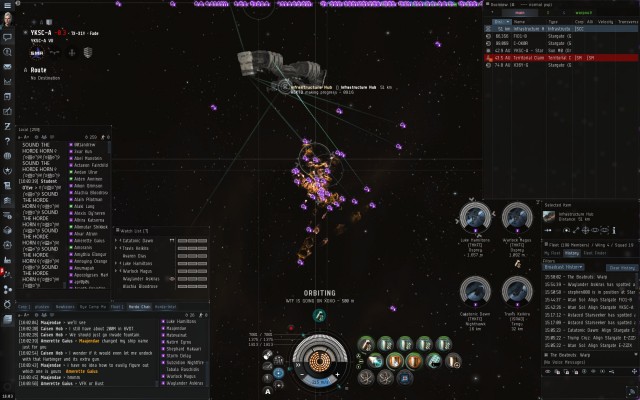 Fozzie lasers at work. At that point, I had reduced the rendering quality in anticipation of a big fight that never happened.

And that was that. Well, almost. The most hilarious moment still was about to come. On our way out, another alliance allowed us to use one of their titans to bridge us home, cutting back on the travel time. However, I guess partly due to the speed at which this “all against Goons” coalition has come together, we weren’t set blue to each other. So as soon as we landed on the starbase that contained the titan, the base’s guns started picking apart our fleet. That made for a slightly panicked and very hilarious moment.

At least the bridge worked, and we made it out… most of us. Expect for those that had already been killed, or those scrammed by the base’s scrammers, unable to jump out, and being killed over the next minute while we were many systems away.

Thus ended my first EVE fleet in years. It seems to have had anything a typical EVE fleet has: long formup times, flying around in space while not finding any fights, waiting for entosis timers to count down, and a funny occurrence at some point through to talk about after the fleet.

In all objective measures, this fleet was a bummer. But as a first fleet in ages, it worked out alright for me. I had time to get reacquainted with fleet mechanics without too much stress, and there’s always another day.

I do hope I get to shoot something tomorrow, though.